There are lots of reasons to debate your choice of major in the U.S., with your eventual earning prospects being an especially important factor for many prospective students. Tuition can be high, so it’s good to know that you’ll get your money’s worth later on in life.

Fortunately, using data from the U.S. Census Bureau’s American Community Survey back in 2018, we’ve compiled a handy list of the majors to look out for if you’re dreaming of the high life. You can thank us later.

If there’s one thing we’ve learnt? It pays to study sciences or engineering it seems. 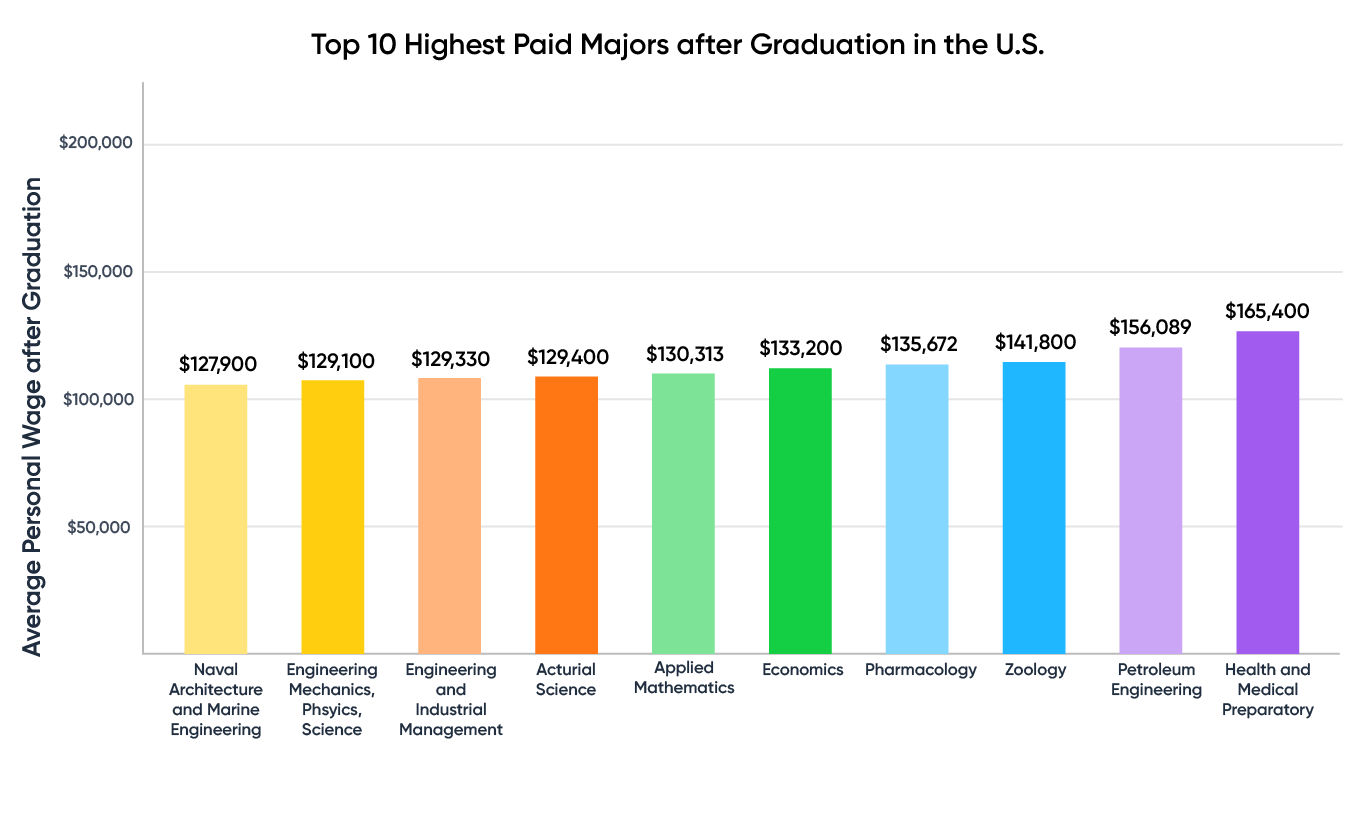 Top 10 Highest paid majors after graduation in the USA

Read on to discover our round-up of the top 10 highest paid degrees in US 2022.

With an average yearly personal income of $128,000 for graduates in this field, this major takes tenth place. According to the data, approximately 19,000 people in the U.S. have at least a bachelor’s degree in this area. Studying encompasses everything from the mechanics of a ship to the engineering and building of major vessels. Not only is it a niche and interesting field of study, but it also has practical application in the world today - and a healthy wage!

Naval Architects can work all over the world for private companies and governments, including BAE Systems in the U.K., the U.S. Navy and Hyundai Heavy Industries in Ulsan, South Korea.

Job prospects include working in teaching, research, as a Lab Technician, Technical Specialist or Design Engineer. With the average income of a graduate hitting $129,000 a year, it comes in at number nine.

Majoring in Engineering and Industrial Management can be a lucrative decision when you reach your second (also known as sophomore) year at a U.S. college. This major is designed to prepare you to manage in the engineering sector and is broad.

Involving the application of science, economics and social study (as well as practical skills), some of the jobs graduates end up in include as a Construction Manager, Quality Assurance Control Manager and Industry Production Manager.

With an average yearly salary of $129,000, it pays to pick Engineering!

Not known to be the most exciting of majors, but nevertheless extremely important, Actuarial Science comes in at number seven.

Actuaries are experts in risk and are used by insurance companies, in the finance sector and by investment firms. By using data and creating models using computing, they are considered a valuable asset in the workplace for those juggling large amounts of cash.

With their average yearly salary hitting $129,500 and only around 21,000 people being graduates in this field, it’s actually a great major to consider.

Always a strong choice for those with a passion for figures (and a desire for a healthy bank balance), Applied Mathematics places sixth in our ranking. The average salary of a graduate is an impressive $130,000 - it doesn’t take a mathematician to see the importance of those numbers!

Jobs that graduates of this major go into are as diverse as a Data Processing Specialist, through to a Global Pricing Analyst, Statistician or Quantitative Analyst.

Picking this major will place you towards the top of graduates by their earnings.

By far the most popular discipline on this list - with around 1 million graduates in the U.S. alone - majoring in Economics is an obvious choice for those wanting to ensure healthy finances post-graduation.

With it being favoured by former U.S. Presidents Ronald Reagan and Gerald Ford, as well as entrepreneur Elon Musk and top-CEO Meg Whitman, it’s a common thread between some of the world’s most powerful in business and politics. Other jobs include as a Economic Consultant, a Credit Analyst, Business Reporter or Banker.

Graduates in this major have an average yearly salary of around $133,000.

Building on the U.S.’ reputation in the pharmaceutical industry, many colleges offer majors in Pharmacology and the closely linked field of Toxicology.

Pharmacology graduates go into jobs such as becoming an Analytical Chemist, a Clinical Research Associate or a Medicinal Chemist.

Ivy League member Harvard University is considered to be the best college to study this discipline, I’m told. Their course offers everything from Pharmacology and Therapeutics, through to Pharmacokinetics, Pharmacodynamics and Drug Discovery and Development (although don’t ask me why it all sounds the same).

Personally, I can’t think of anything more fun than majoring in Zoology, which comes in third. Focused on the study of animals (both living and dead) - particularly their environments, food, protection and evolution. Zoology majors go on to work as Nature Reserve Wardens, Vets, Environmental Consultants and Gamekeepers.

With graduates of this discipline earning on average $142,000 in the U.S., it’s clearly a fruitful business, too. Over 40 colleges offer it as a major, so there’s also plenty of choice - much like the broad selection of incredible animals you’d be working with! Around 110,000 U.S. graduates majored in this field, so it’s clearly a popular choice.

With a rich history of oil, the U.S. invests heavily in its Petroleum Engineering graduates. Placing second in this ranking with a yearly income of around $156,000, if you choose this major you’ll be both financially comfortable, and contributing to an international industry worth an estimated $86 trillion.

Being part of such a prosperous field comes in handy when looking at salaries, with this major coming in a close second.

Taking the top spot, perhaps unsurprisingly, is Health and Medical Preparatory - more commonly known as ‘Pre-Med’. Comprising of a cocktail of courses including biology, physics, anatomy and physiology - this is a possible and popular major for those planning on delving into the professional world of Medicine.

Many students majoring in this discipline become doctors, surgeons or healthcare professionals - and apparently get paid a healthy amount to do so too, with the average salary of graduates in this field hitting $165,000 a year.

Lily is a Content Writer and Editor based in Manchester, UK. She is passionate about travel, literature and higher education.

USA, Study in the USA

The 7 most popular cities for international students in the USA

USA, Study in the USA, US education system

USA, Visas, Study in the USA

Which US student visa do I need?

Can I study in the USA without IELTS?